New businesses (or existing ones in new markets) become successful by creating a capability, excelling at it, and then transforming that advantage to a "position based competitive advantage". This allows them to build defensibility and lock in the economic benefits of their scale. This has been the standard model for how businesses are expected to behave if they are acting to maximize the economics of their strategies (i.e. profits). It's been true for manufacturing based businesses 50 years ago, and it's true for the most cutting edge internet business today.

Having recently completed the "Economics of Strategic Behavior" class at my MBA program, I wanted to take a look at how classical business strategy frameworks can be applied to the way companies making use of blockchain technology will compete as they mature. This is by no means a comprehensive analysis but rather a curious exercise.

Blockchain technology (blockchain used as a synonym for all distributed ledgers. Not describing only the Bitcoin Blockchain, hence the small "b") promises a lot of things: faster payments, instant settlements, free notaries, smart contracts - the list goes on. At the end of the day however, it boils down to one thing: storing and transmitting value efficiently and programatically. People interpret this in a range of different ways, from "power to the people, we'll no longer need banks and large corporations, woooo!", to "banks will get rid of their regulatory burdens and get richer". It's easy to get emotional about technologies purported to be revolutionary, but a rationalist way to look at possible outcomes would be to construct a framework for analyzing how it might change the economics of organizations' strategies. With blockchain, can companies hope to grow their businesses exponentially and reap in more profits, or will it be business as usual?

Type-I) Blockchain to Transmit Value: The main reason so many people see blockchain as the next internet is because it [blockchain] is to value as the internet is to information. Internet companies were able to create new businesses by using and transferring information more efficiently thanks to the internet. Blockchain companies will create new businesses by using and transferring value more efficiently thanks to blockchain. These companies will use blockchain to either power the core features of their product (e.g. Coinbase allowing you to store, transfer and trade value more efficiently) or add mission critical features to their core products (e.g. Brave, a new browser that features embedded micropayments powered by Bitcoin). As the core product and main revenue stream of these types of businesses will be based on traditional economics, they will continue to compete and grow based on traditional models of strategic behavior. For example as Coinbase goes up the learning curve and adds more features to its product, more users will use the services that generate revenue for the company, and the cost per user for developing better features will go down. Classic economies of scale. 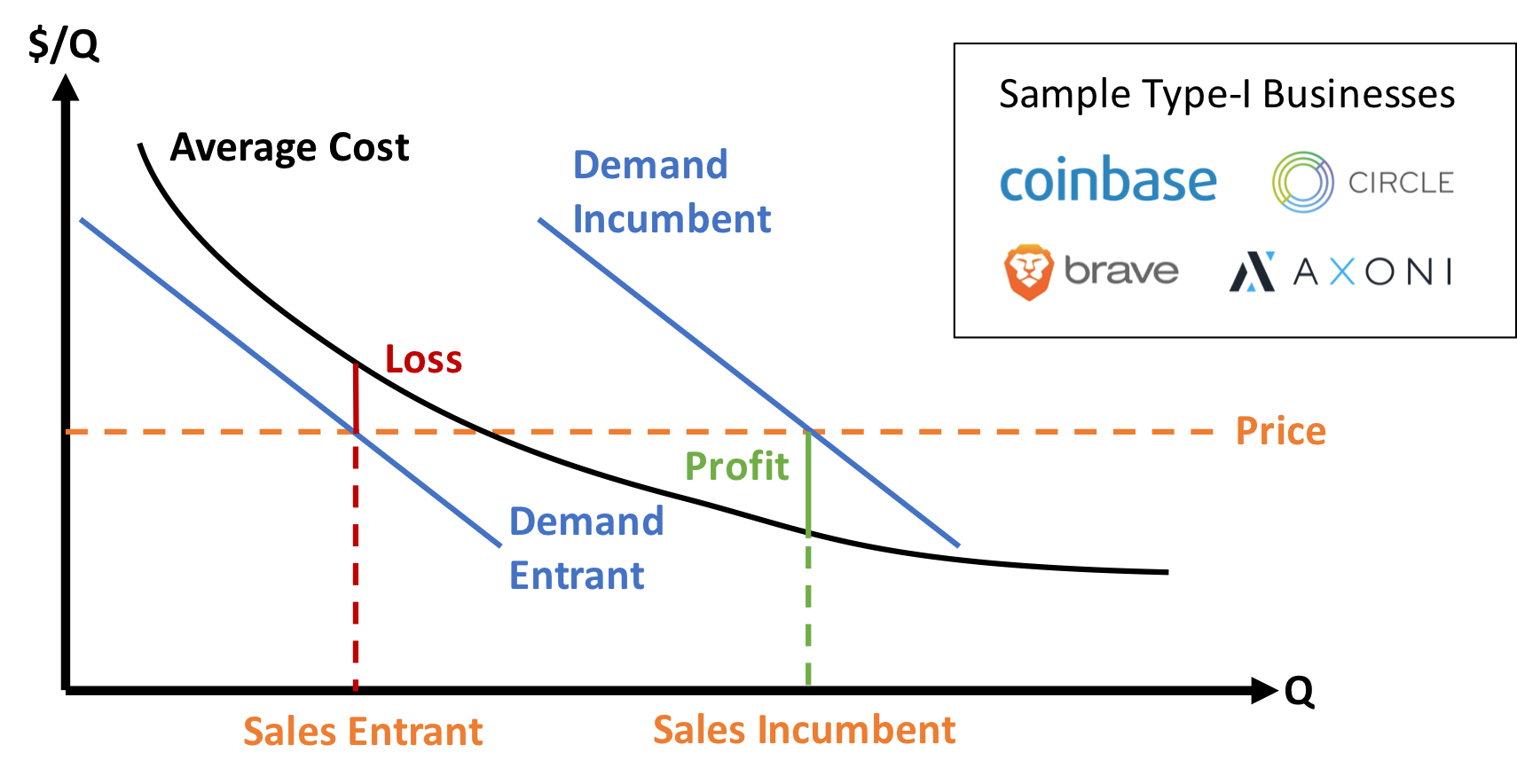 Type-II) Blockchain to Create Value: Now this is where it gets interesting. Some companies, are starting to build their company on a blockchain. The important distinction here is that the company needs to own the value creation mechanism, either by building it on top of a programmable blockchain such as Ethereum, or by creating its own proprietary one, such as Steem. What this allows for is for the company to accrue a two dimensional revenue stream: 1) classical revenue from fees charged for the use of the service/product AND 2) the increase in value of its proprietary tokens as more users use the service. Bare in mind that these tokens are required for the core product/service to function. Since the company will own/control a disproportionally high percentage of these tokens, it will essentially be creating free capital for its own use. For example, as Steemit (the company that created the Steem token) improves its platform and attracts more users, cost per user for developing better features will go down, AND costs overall will decrease (on paper) by virtue of the capital Steemit creates for itself as the value of Steem goes up (due to increased demand from users). 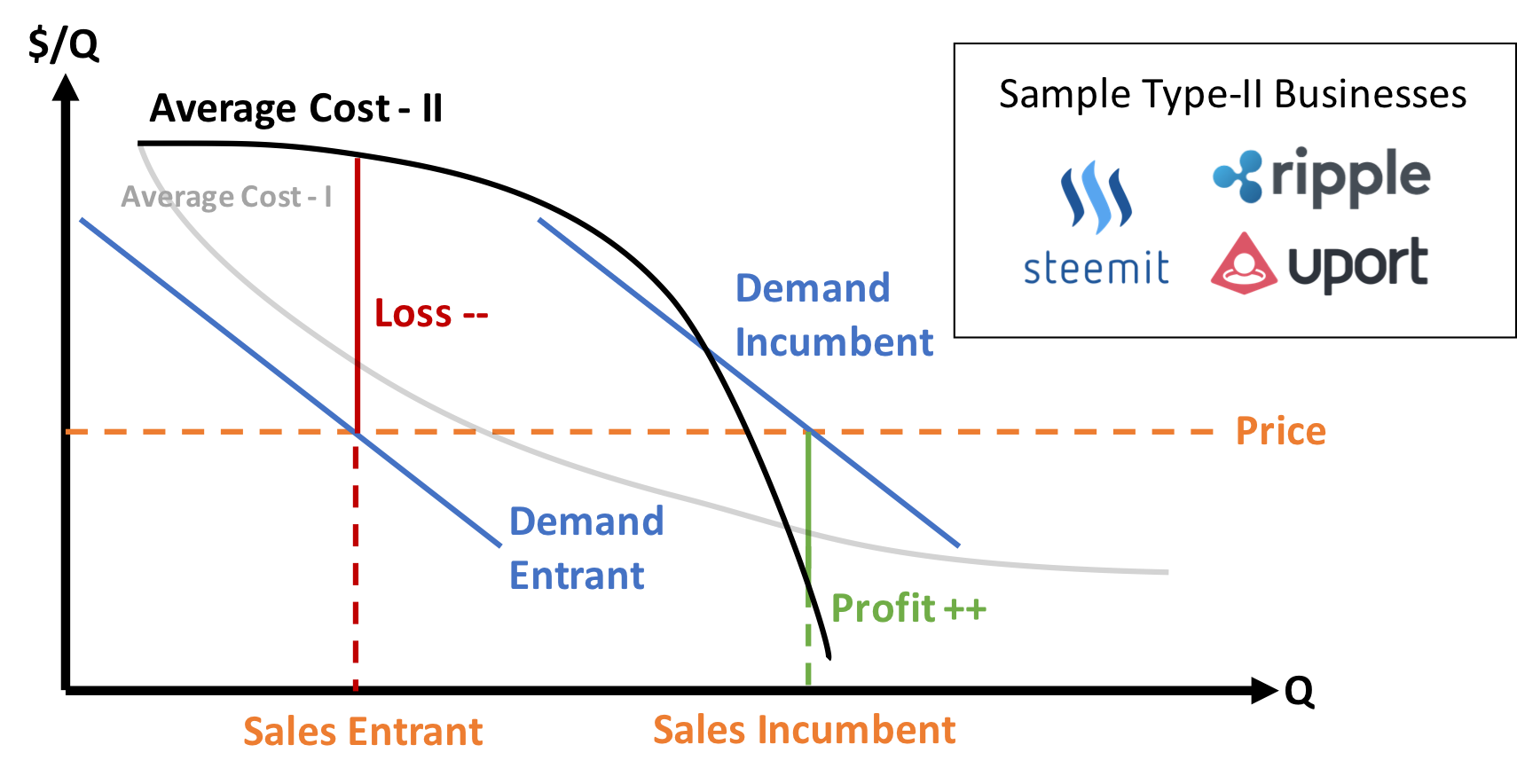 It's important to note here that the shape of the average cost curve between Type-I and Type-II is different as it's much harder to scale blockchain based protocols (at least today). Hence, cost per unit, in its initial stages, does not decrease as fast as it does for internet based businesses.

The acceptance of blockchain as a revolutionary new protocol is already well underway throughout the technology and business world. Harvard Business Review has put together a very thorough and guiding analysis of this in a recent article. As highlighted there, although it will take decades, Type-I businesses making more efficient use of value will compete with rules governed by traditional corporate strategy and many will disrupt value related industries.

Whether businesses will be able to utilize blockchain in a more powerful way and level it up from a protocol to a token (Type-I to Type-II) is another question. The HBR article provides the below analogy between internet businesses and potential blockchain ones. I think it's a powerful framework, with one caveat: the internet businesses in the top-right quadrant are far more larger than Skype. They are the likes of Google and Facebook. 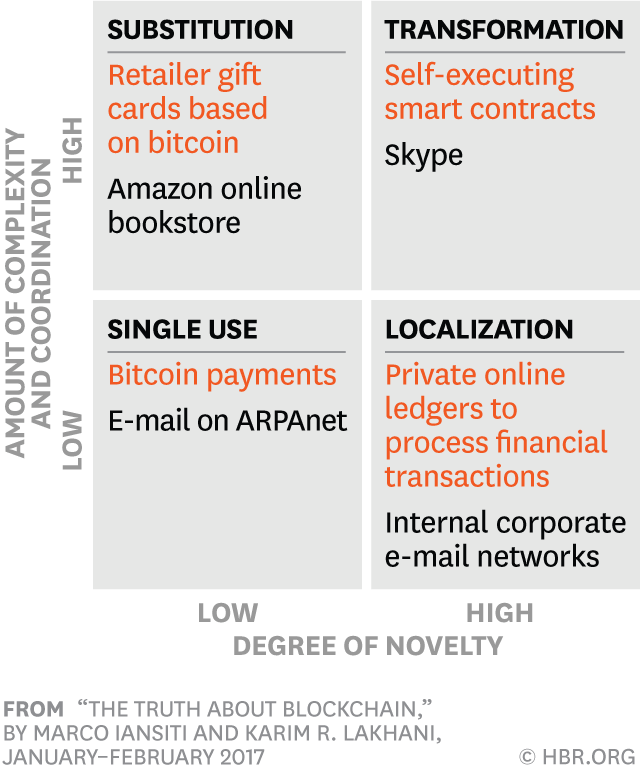 Google, Facebook and others have created their empires not only by using the internet to transmit information more efficiently - no, they have used it to capitalize on the information their users have created and build the most valuable companies in the history of capitalism. Will companies in the blockchain era be able to do the same and capitalize on the value their users create? Only time will tell... If they can however, I believe Google and Facebook will seem miniature compared to these new businesses in many ways.

What is writing - science or art? Seems to be a bit of both. Perhaps that's why it's so…